These are recordings taken with market traders and passers by who took part in ‘Rubbing Out’ and shared their perspectives:

Rubbing Out engages audiences in the phenomenon of species loss through participatory and performative drawing interventions and process-led dialogue with communities and audiences. A collaboration with film maker and artist Gemma Riggs.

A drawing of a Wild Atlantic Salmon now on the endangered species list was used in a participatory experiment. Set up outside Studio 73, in busy Brixton Market, passerby were invited to ‘rub out’ the drawing and investigate feelings surrounding the act of changing the image and its implications to a wider context. How would people engage? An inception of a new project captured on film and audio by Gemma Riggs.

Wild Atlantic salmon in crisis..of Northern Ireland’s 44 salmon rivers, 30 have populations that are either endangered or vulnerable, and 55 out of 76 salmon rivers in England and Wales are degraded. In Scotland, the species is endangered in over 30 per cent of salmon rivers.

The initial experiment produced some images and voice recordings of people’s reactions during the project. This proved to be heartfelt, moving and insightful.

The vision is to produce a number of drawings (maybe life sized) of different endangered species from the five main animal groups to use in art-interactions and video / record the engagement to create an intimate multi- media archive. Growing and developing as each day passes, this will culminate into an evolving exhibition of the altered artworks (in their own right should be beautiful) and film / recordings to be presented within a space or gallery setting. Accompanying talks/ workshops could  be held around the project themes.

The drawings become unique snapshots in time; remnants, smears, shadows, ghosts, impressions and memories of our encounters. The project takes an expanded approach to scenography; the scenography of public and quotidian space. We are interested in how the different contexts used for the site-specific work affect outcome and to reach a broad range of people.

The piece aims to draw together activism, ecological awareness, concepts of expanded eco-scenography, community engagement and archival records of this moment in history.

Design treatments and mock-ups for the Rubbing Out scenography, features the ArtStation prototype designs:

The eco-scenography holds creative space for connection and features a portable ArtStation that folds away into a portfolio, drawing boards that double-up as display boards for presenting the altered artworks and concertina stools which provide flexible seating options. It is proposed, in line with our ethos, to use only what can be carried, borrowed or found on site. The deliberate stripped back coherent aesthetic explores the properties of packing card (Triwall 4-10 ml) for a low environmental impact design. 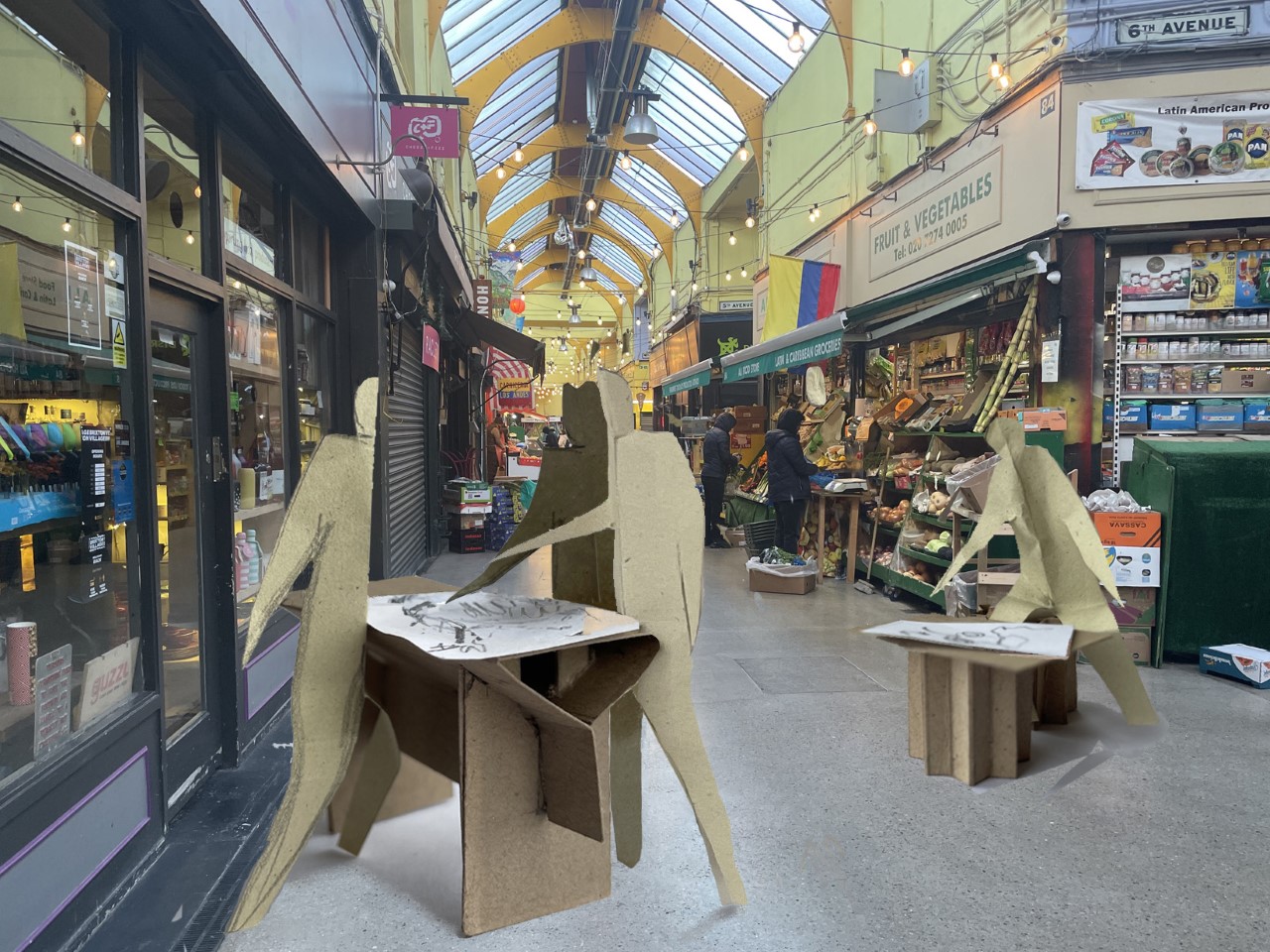 Up / Down ArtStation for public spaces, shown here in a market setting. 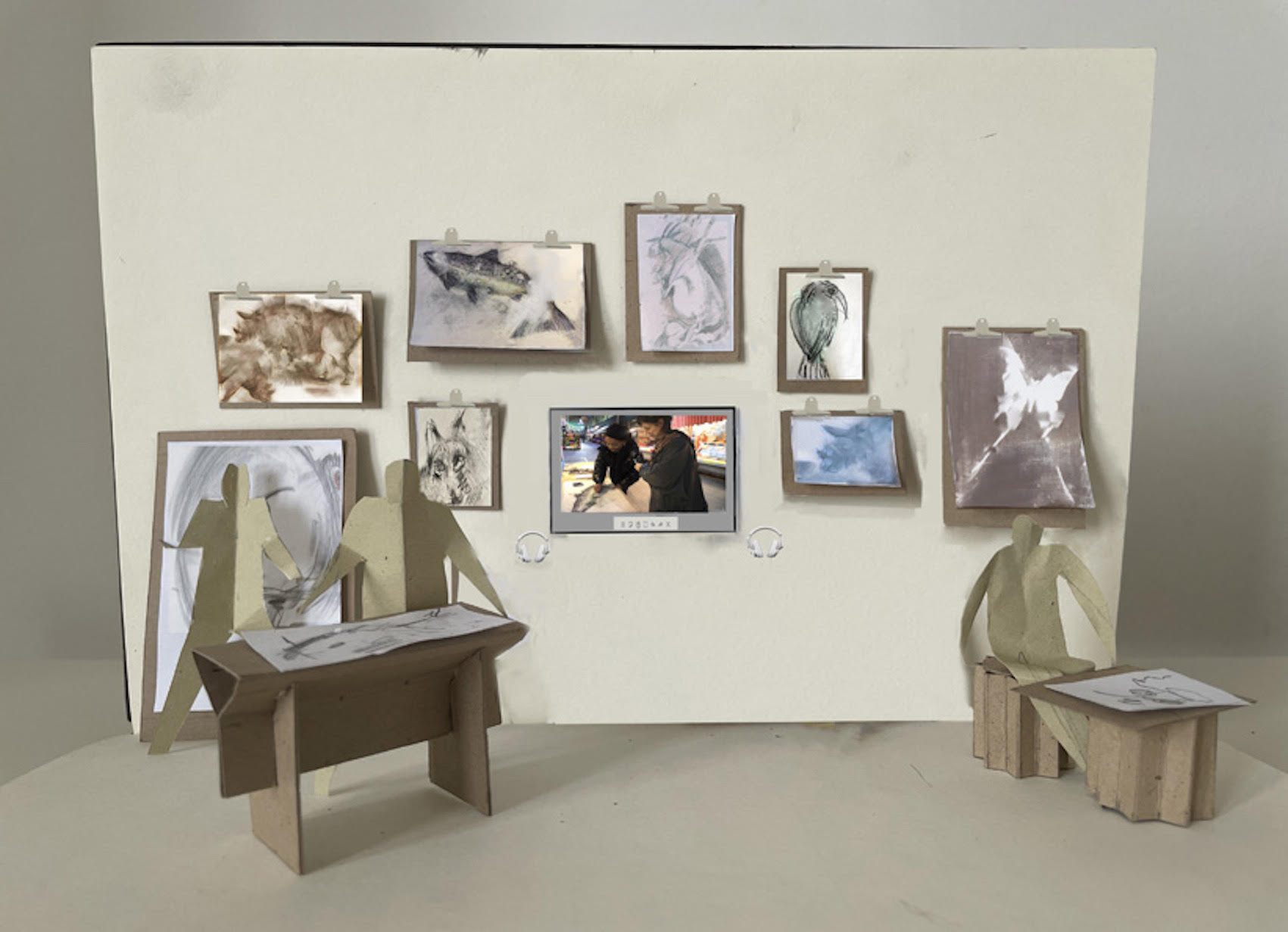 An evolving gallery of interchangeable altered drawings and multi-media archive. Audio and visual material is presented through headsets and a monitor on the wall. 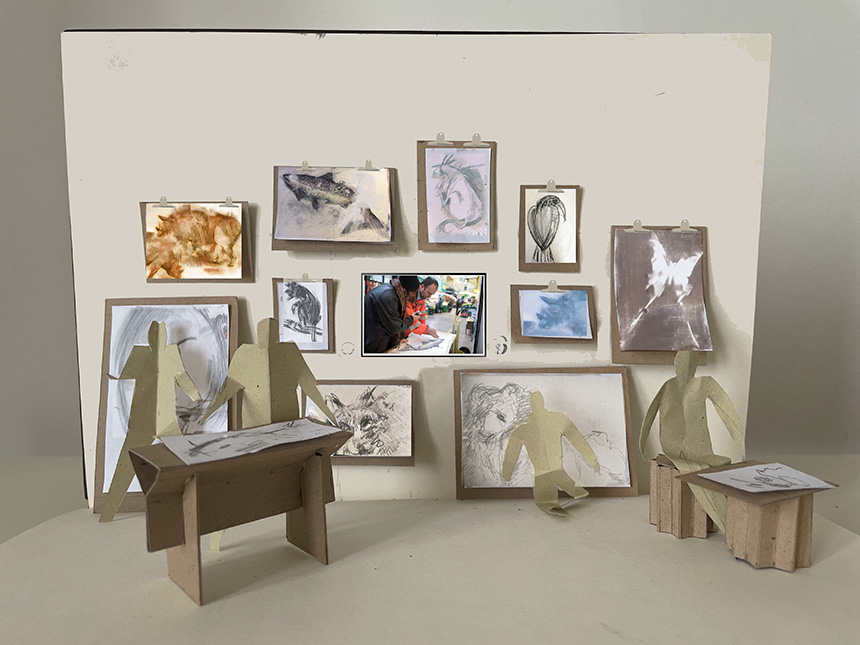 An interactive accumulating scenography of material of drawings, voice and image.

A seating area using Concertina stools in various heights can be re-configured by audiences. 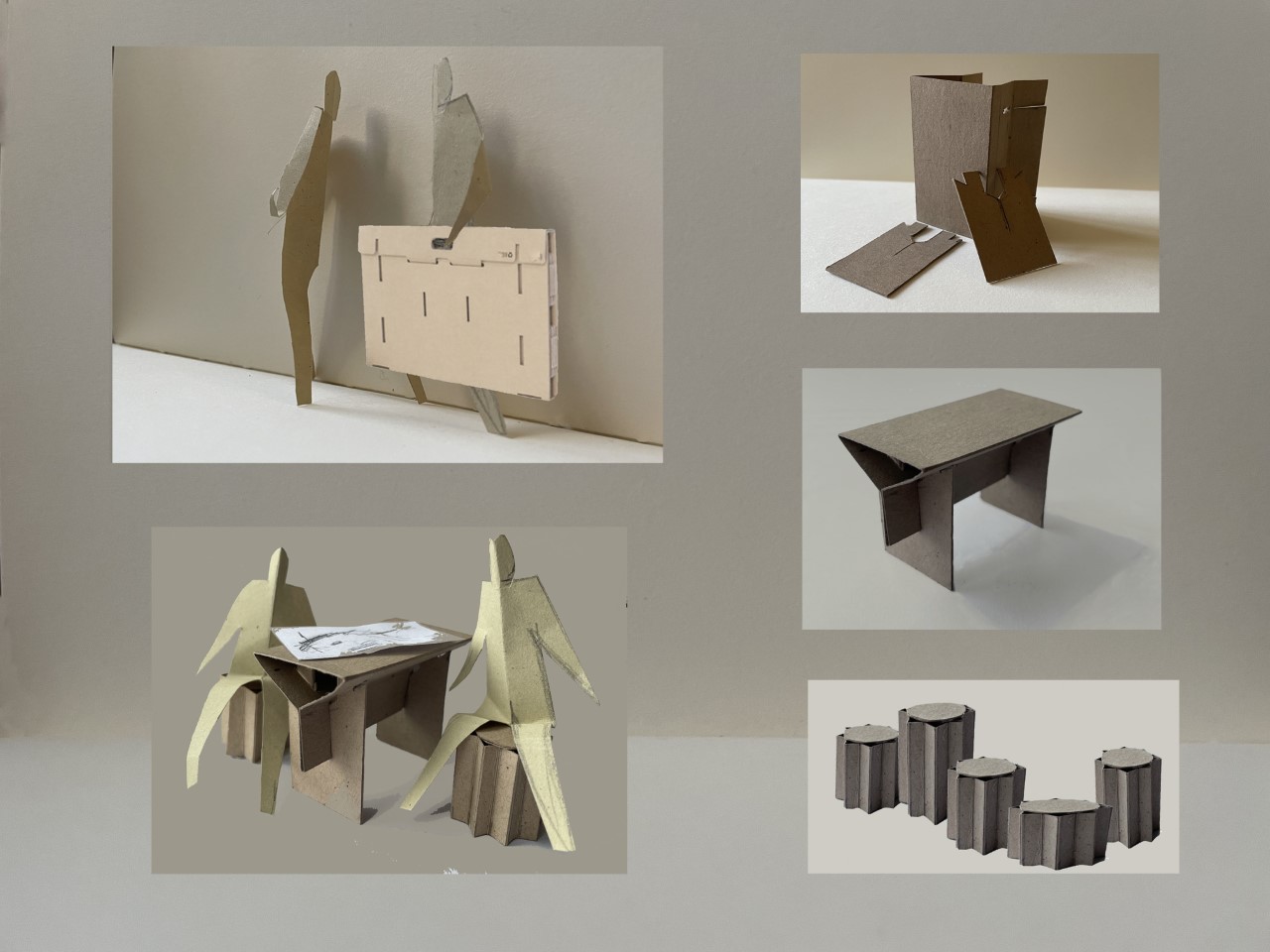 Assembly of prototype Up/Down Table ArtStation and flexible Concertina Seating. ArtStation carries as a portfolio, unfolds for assembly and the Concertina stools in various heights can be reconfigured.